C4DM at the 138th Convention of the AES

Last week saw the 138th Convention of the Audio Engineering Society, for the first time held in Warsaw, Poland. It's the annual European gathering of audio engineering researchers, as well as professionals, students, and companies, alternating with its odd-numbered American editions which take place in Autumn.

Queen Mary University of London, and more specifically the Centre for Digital Music(C4DM), had a strong presence at the Convention - if not in numbers, then certainly in impact. Liam B. Donovan, György Fazekas, Andrew McPherson, Joshua D. Reiss, Bob Sturm, David Moffat and Brecht De Man all attended.

Dave Moffat, PhD student, successfully ran against two other candidates for the role of Vice Chair of the Student Delegate Assembly for European and International Regions, and will as such be representing an estimated 4000 student members worldwide. He succeeds Brecht De Man, also PhD student, who was elected for the same position at the 136th Convention in Berlin last year, and who will now become Chair. The Student Delegate Assembly representatives are a team of four students (two for North and Latin America, and two for European and International Regions - now all represented by QMUL students!) who answer student queries, support independent student events, represent the student members in the AES and its Education Committee and - perhaps most importantly - organise many events at the biannual Conventions. Among them are the Student Recording Competition, Student Design Competition, Student Party (at a local club or recording studio), an opening and closing student meeting, and an Education and Career Fair where institutions and companies can exhibit, promote and recruit to students for free. For the first time in many editions, if not ever, Queen Mary was represented (by Dave Moffat) with a focus on its new Sound and Music Computing MSc. 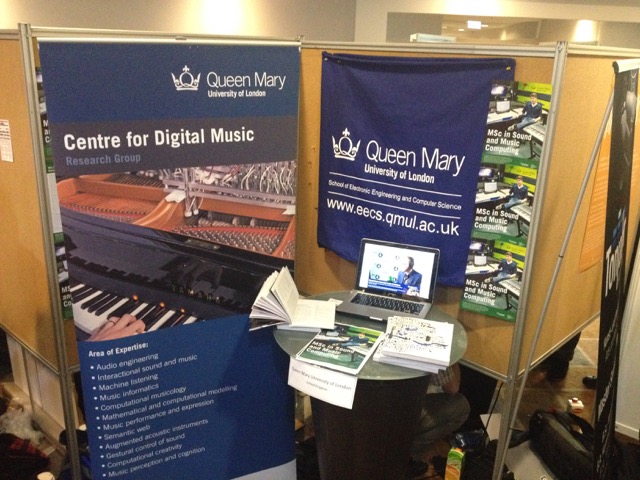 Queen Mary and its Centre for Digital Music at the Education and Career Fair, showcasing undergraduate and postgraduate courses, and Matthias Mauch.

Dave was previously responsible for the technical side of the 2015 Audio For Games conference. Brecht is Chair of the AES London UK Student Section, Vice Chair and Chair of the 2014 and 2015 editions of the overbooked AES student event Up Your Output!, and was part of AES conferences on Semantic Audio, Audio Forensics and Audio for Games in various capacities. As of March 2015, he is a committee member of the British Section of the AES.

The following papers were presented at the convention and can soon be found in the AES E-Library*:

Victor Zappi and Andrew McPherson, "An environment for sub-millisecond-latency audio and sensor processing on BeagleBone Black"

The latter received significant attention in the tutorial Listening tests - Understanding the basic concepts the very next day, illustrating the bias stemming from familiarity with audio content in listening tests that was demonstrated in this paper: 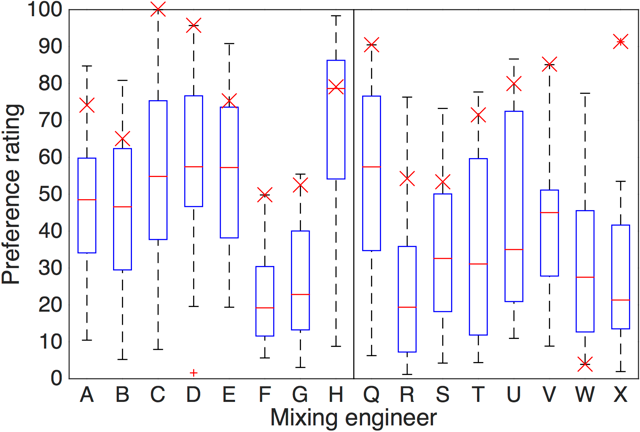 Preference rating of one's own mix (the red 'X') is rather consistently high compared to others' ratings of the same mix. A-H and Q-X each represent 8 different mixes of the same song; preference ratings are collected through a multi-stimulus perceptual evaluation interface. (Paper attached for your reference)

Josh Reiss, Reader in Audio Engineering, was Papers Cochair of this convention, and is a member of the Board of Governors and various committees.